Studio E2 this week – A veg box catch up.

One whopping long post…catch up time….. 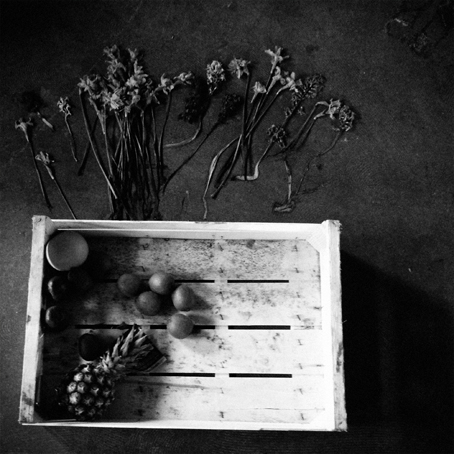 …….So I’m at the end of last weeks veg box, and I’ve friggin got my Organic Wick order in too late for this week. Bummer.

Onions…French onion soup – See above –  One of the best soups I’ve ever made.

Turnips…. I’m never excited to see turnips. But I popped these two, peeled and sliced in the Thai Yellow Carrot Curry I made with the carrots from Veg Box No.19. They worked perfectly. The flavour softened and they were soft and succulent. 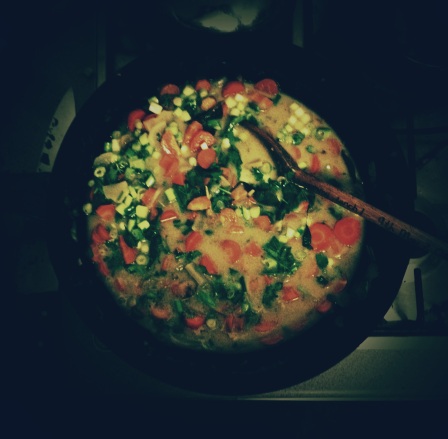 Broccoli…Roast chicken with broccoli. My new favourite recipe from Ideas in Food. (Great Recipes and Why They Work by Aki Kamozawa & H. Alexander Talbot ) This is the second time I’ve made it, using the broccoli from last weeks box. The broccoli cooks under the chicken that you’ve flattened out. The skin was crisp, the meat juicey and tender, and the broccoli melt in the mouth. Very easy and very clever. The next day there was an amazing broccoli, chicken soft wobbly jelly set in the bottom of the tin. So delicious. Would’ve been good with some good bread, (as always! #whatlocarb) but was good just with some of the cold chicken and salad.

Kiwi…Kiwi and feta salad with kiwi dressing. (see below) Feta, ripe avocado, pink grapefruit, pomegranate, and ripe kiwis. Kiwi dressing made with crushed kiwi, a pinch of fennel seeds, (Thanks to @mariesophiewigbers see below…) sechuan salt and garlic. Served on ripped up salad leaves. 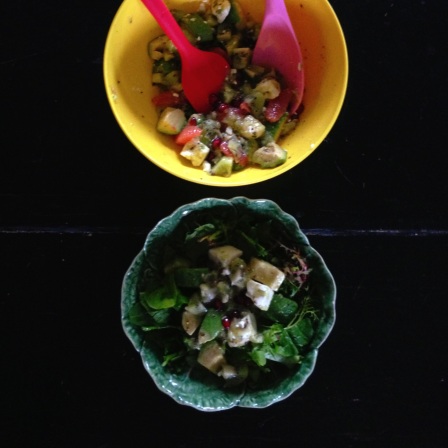 Green peppers….I’ve stated before how much I hate green peppers. Especially raw green peppers. Then 2 turned up in the veg box this week, and I knew I had to get over it. One of my most adored food moments was in fact being given a dish of green peppers. This was food of the Goddess’s, and made by my friend Simonetta’s mum in Turin. They were silky and slippy. Meltingly tender and juicey. I was very young and very naïve. I had never tasted anything quite like this ever before. These green peppers had been roasted until collapsing. Cooled, skinned, deseeded and dressed with extra virgin olive oil. I will never forget that experience.

I dressed the roasted and skinned green peppers with this Chickweed, Wild Garlic and Anchovy pesto. I foraged the chickweed and Wild Garlic locally and shelled and toasted cobnuts and walnuts, (that have been sitting in a bowl on the side since late autumn…I know! I know!) in place of pine nuts. I made two pestos. 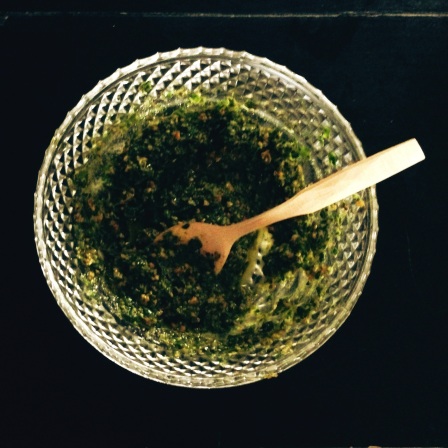 On Foraging London’s blog this week about Wild garlic, Jon Daniels says he’s not entirely convinced about whether to blanch the leaves first, before making a pesto. “briefly blanch in boiling water and put into iced water, supposedly removes bitterness and enhances colour…….but does help wash them and remove dirt.”

So in one pesto I used raw leaves and for the other pesto I blanched all the leaves as above. The pesto with the blanched leaves was softer, rounded and not so harse as the raw leaf pesto. They were both delicious, but I prefer the blanched leaf pesto.

Later that night……My friend Jodie and I had this with Toulouse sausages, mayonnaise and sweet chilli sauce. Mighty fine. Then I had this again for breakfast today in scrambled eggs. 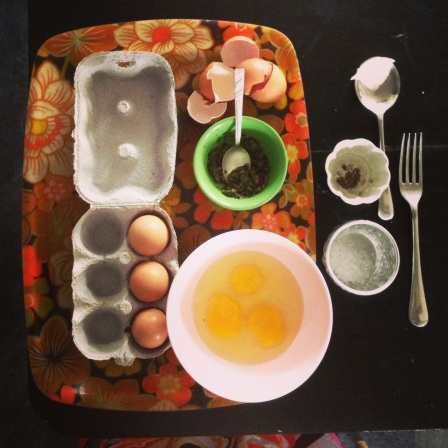 Try stirring some of the pesto into soup or through pasta or creme fraiche…. 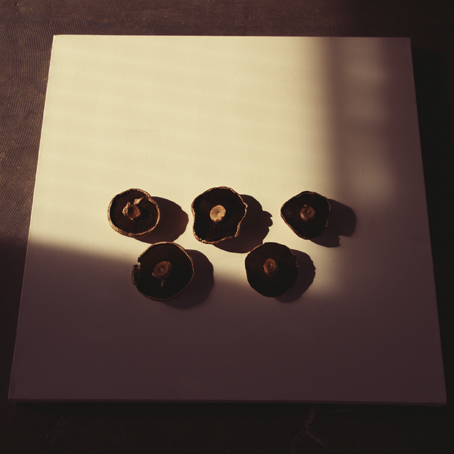 Flat mushrooms ……Although I do love mushrooms and it was so tempting to have them with poached eggs, I have been wanting to do a piece of art work with some mushrooms for a while. It’s not quite working out as I had expected. But I do like them on the canvas…… 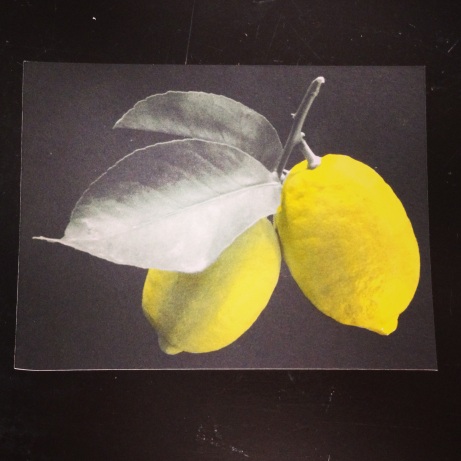 I also made some preserved lemons and I’m swapping a huge jar with a home smoked ham hock from Delicious Magazine’s Food Editor Lizzie Kamenetzky (@deliciouslizzie) who’s just started the Delicious Food Swap encouraging people to swap food they’ve made or grown locally in their community. It’s a neat idea. Here’s the label (above) that I’ve painted for the lemon jar.

“DeliciousFoodSwap, an online space for cooks, bakers and gardeners to meet online and to swap and share kitchen creations and garden gluts. It’s a forum to swap good things you’ve made for someone else’s good things, and it could be anything from sausages to cheese, cakes, bread, jam – or perhaps something you have grown in your garden.”

Lizzie’s coming to Studio E2 tomorrow to swap. she’s also getting a jar of the above mentioned Pesto. I really can’t wait for the ham hock tomorrow!

This week I’ve also had the real pleasure of working with Marie, (@mariesohiewigbers) here in Studio E2, (#studioe2) who’s here from Holland on a college placement. Marie cooked up one of her favourite Dutch specialities, Runvleeskroketten (Meat croquettes) for me. They were so delicious. Gooey and meaty bechamel croquette with a crisp breadcrumb shell.

I whipped up some mayonnaise, because Marie likes mayonnaise with them, and we served them with dressed salad leaves (Marie made a lovely salad dressing with a pinch of fennel seeds.) and the traditional  accompaniment of mustard. (I had Dijon) on the side. (#whatlocarb) We need to test the recipe again, to tweek it. Then we’ll post the recipe up on here….

Marie needed beef stock for the recipe and it inspired me to make some fresh beef stock myself. 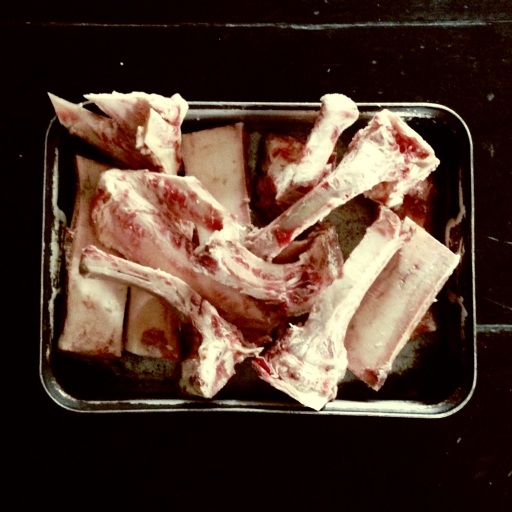 Making this simple stock again, reminded me how incredible the flavour of fresh stock is.

If you’ve never made fresh stock then I insist you must make some at some point soon. (you can always just make a small amount) I was able to drink a bowl of it on it’s own, just seasoned with salt and pepper with some toasted Gruyere toast on the side.

The next day we made the French Onion Soup. Sweet and melting onions, topped with slices of baguette and Gruyere, then grilled til bubbling…..soft and squidgy baguette bottoms have sucked up the sweet onion and beefy broth…..but with a crunchy…..crispy top.

Although this soup is French, the flavours and smell of Gruyere cheese cooking, wine, stock and bread, automatically transport me back to working in the mountains of Switzerland…..

I need to wipe my blackboard…..